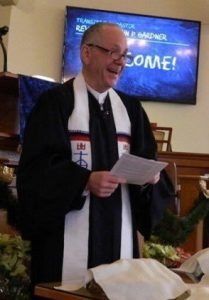 Good-bye’s are never easy, even when they are tied to joyful occasions! Sunday, January 5, was not only the first Sunday of a new year, a year when we have the awesome opportunity to welcome a fantastic new minister, Nikki Shaw to pastor our church family, but this Sunday was a time to say farewell to John Pugh Gardner, who has served us so faithfully since last July.

John made it clear from the beginning that he was to be referred to as “Transitional Pastor and Teacher.” But in the seven months with us, he quickly earned an additional title that was just as meaningful, he became our “friend.”

Throughout the time John was with us, we all were inspired and learned from John’s sermons and lessons, including his reoccurring final blessing, “We aren’t here for very long, so let’s make the most of it in Jesus’ name.” Amen and thank you, John P. Gardner