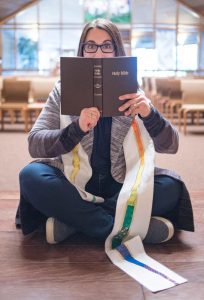 Not long after that email, I got another from a woman named Becky, trying to track down some record of her parents marriage, which happened in our Chapel in the Garden in 1955.

I also had the pleasure of a long chat with Veryl Carpenter about the history of that little chapel and its relocation journey to our church property in 1988.

I started some of my own internet search, and came across many FCUCC tidbits, not least of which was a list of our impact in the community, compiled by Judy Goodrow (long before I knew I’d be called as your pastor, it was Judy who set me on my path to attend Christian Theological Seminary, where she also went for her Master of Divinity). In a Herald Republican article from May of last year, where our 150th celebration was highlighted, Judy contributed the following: “Other firsts First Congregational can boast, said Goodrow’s history, include being the first to welcome the African Americans living in Angola and being the first mainline denominational church in the county to call an ordained senior pastor, which was Davis in 2000.” I’m certain that last line is meant to say that we were the first mainline church to call a woman as our ordained senior pastor. 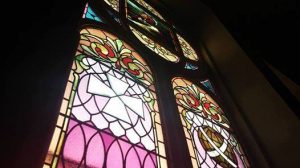 Henry Linder, it seems, according to the information Jim Harris unearthed, was “[f]rom the time of the organization of the first Congregational church in Angola in 1869 . . . a supporter of its services and charities and was for many years a trustee of the society.”

Henry died in 1905, his funeral was officiated by the newly installed Rev. Humphreys, the pastor who served our congregation for 40 years in whose honor the Chapel in the Garden is named.

We have one story to tell, one story in God, Christ and Spirit, that is weaving together, even now, with the individual stories of those who came before us, those we know, love, and labor with now, and those who are coming in the wake of our lives. This month we will honor the life of Linda Driver, who died on July 15th, and in her “worketh willingly with her hands” she has touched many. She is a part of that larger story, the one connected to our church and all of the community, to her own family and growing up in Fort Wayne, to Henry Linder and Rev. Humphreys and Rev. Deb Davis and our historians Jim, Veryl, and Judy, and to all of us who come to this place to worship and serve. Like Linda, we all have value and impact on the world around us, and whether we are memorialized in stained glass or in the heart of one another, let us trust that we are caught up in God’s Good Will and the unfolding story of a world being remade for goodness and equality and heaven on earth.

You can check out some of the information Jim and I dug up here: